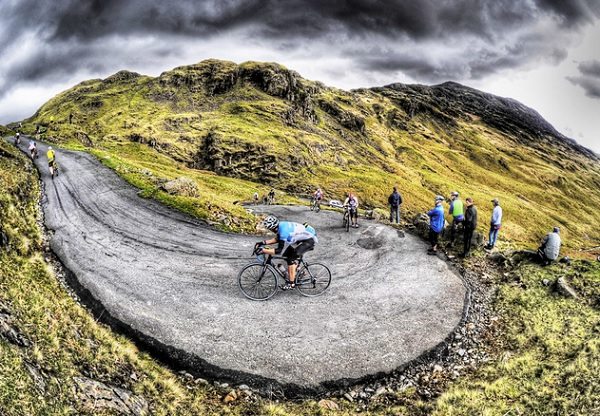 Great news for cycling! The Cycling Tour of Britain returns to Cumbria and the Lake District.

In February the route for the 2016 Tour of Britain was announced.

The Tour starts in Glasgow and finishes in London.

This stage starts on Monday 5 September and is the fourth time that Carlisle has hosted the start in our region. I remember watching the event back in 2013 where I watched the cyclists climb the gruelling hill of Beast Banks in Kendal and yet again this task will be repeated.

This is the fourth time that Carlisle has hosted the start in our region. I remember watching the event back in 2013 where I watched the cyclists climb the gruelling hill of Beast Banks in Kendal and yet again this task will be repeated.

If it wasn’t enough for them to tackle Whinlatter Pass and The Struggle it seems cruel, in my opinion, for them to finish on such a steep hill (11% climb) in the centre of Kendal. The only saving grace is that the people of Kendal will give them an amazing warm welcome. I have to say the effort that the Tour of Britain support team go to is phenomenal. They are there all day preparing the area and go around giving toys, hats, banners and cheering sticks for people to use. This is a great way to engage with children and perhaps even spark an interest for those who are new to the sport. I was there in 2013 when there was an amazing sprint at the end by Gerald Ciolek to win the stage. I have to admit the last thing I expected to see after the climb of Beast Banks was a sprint!

Beast Banks is a relatively small area of Kendal – a very narrow residential hill – directly linked to the town centre. At the top of the hill there is a small green and a village style pub. This area is already well known as the Post Office that used to be here was the inspiration for Mrs Goggin’s Post Office in Postman Pat. Although the Post Office is no longer used there is a plaque as a reminder and the area has retained a local village feel despite being part of Kendal’s town centre. The local residents quite often host events on the green in the summer which is a lovely thing to see.

Stage two will run for 195 km through Cumbria and Tour of Britain director Mick Bennett says that although the route incorporates major cities it manages to “touch many smaller communities and areas where we know the passion and support for cycling is so great” This statement could have been written about Cumbria. The passion that our county shows for events never ceases to amaze me. We are blessed to have a large amount of talent in Cumbria due to the high volume of artisans who showcase work. Kendal itself hosts various events including Mintfest, The Food Festival and the newly launched Arts Festival.

The route it will start in Carlisle City Centre going onto Penrith, Cockermouth, Keswick and Ambleside before heading for Beast Banks. The climb of Whinlatter pass takes them above the beautiful Derwent Water which is Keswick’s local lake. In the final 30km of the race they are asked to tackle the toughest of three routes up Kirkstone Pass which is appropriately called The Struggle. Kirkstone Pass is the highest major road in the Lake District and truth be told I won’t even drive on it. It is so steep that at times, as you drive, you can’t see which direction you will be heading once you reach the peak. The scenery is breath taking if you are able to take it in which I imagine the cyclists won’t be!

The full teams for the 2016 Tour of Britain have yet to be announced at time of writing but you can keep up to date with their latest news on their Twitter and Facebook.

Holiday Cottages Cumbria are delighted that Cumbria and the Lake District will be hosting The Tour of Britain again.

We have 6 holiday cottages located throughout Cumbria and the Lake District and a 7th cottage will be opened in June.

All of our cottages are ideally located for cycling fans wanting to watch this great event.

You can see our lovely holiday cottages here