The Lake District’s ‘Atlantis’ is Revealed 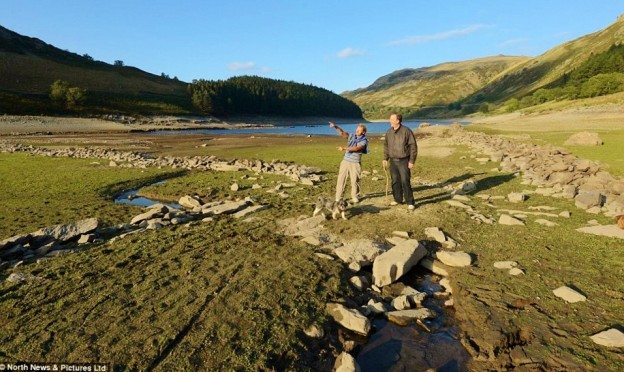 A village drowned during the 1930s reappears after the driest September for half a century.

With the warmest September since 1960, the small Cumbrian village of Mardale Green has rarely been seen since the 1930s when it was flooded by the Manchester Water Authority to make way for Haweswater Reservoir.

Farm buildings, pubs and even a church and its graveyard were dismantled stone-by-stone and coffins were removed from the graveyard and buried nearby.

Nearly 80 years on, water levels at Haweswater reservoir are starting to drop significantly due to the lack of rain during the recent dry summer months. The remains of the ancient structures, including farm gates and tree stumps, have now been revealed along the receding waterline.

“It has been the driest start to September since 1960.” said a spokesperson for the Met Office. “In Cumbria, there was 2.3mm of rain, which is only 2 per cent of the expected rain fall for September. Between September 1st and September 15th, we would expect around 50 per cent of the rainfall for the month.”

Mardale Green was considered one of the most picturesque villages in Westmorland, Cumbria, and many people thought it should be left alone but when the Haweswater Dam was built, it raised the water level by 95ft (29 metres) and can hold 84 billion litres of water.

It was considered to be an engineering feat in its time, built from 44 separate sections, joined together with flexible joints. The reservoir today supplies about 25 per cent of the North West’s water needs. It is fed by various streams and aqueducts from Swindale, Naddkle, Heltondale and Wet Sleddale.

There was a public outcry at the time of its construction. Mardale Green was considered one of the most picturesque villages in Westmorland, Cumbria, and many people thought it should be left alone.

Lake District writer and walker Alfred Wainwright lamented the passing of the old valley. He wrote: “Mardale is still a noble valley. But man works with such clumsy hands! Gone forever are the quiet wooded bays and shingly shores that nature had fashioned so sweetly in the Haweswater of old.”

This week, hundreds of visitors have been to see the ruins laid bare by the receding waters in the years of drought.