Santa is missing a reindeer! 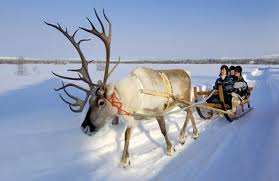 If you go down to the woods today you may well be in for a surprise!

That’s becuase a reindeer has gone missing in Whinlatter Forest in the Lake District. A seven-year-old adult male called Borneo was one of two reindeer on show at Whinlatter Forest, near Keswick but Borneo scaled a seven foot high fence after being spooked by a dog and ran off into the woods.

Park rangers have spent hours looking for him and now they’re asking for help.

Barbara Thomson, from the Forestry Commission, which owns the Whinlatter site, said Borneo could survive for some time in the wild. “This isn’t so much a welfare issue because there will be plenty of food for him to eat out in the forest. But we really would like to have him back!” And no doubt, so would Santa!!

“We would appeal for anyone who is out and about in the Whinlatter area to please let us know if they see him.”