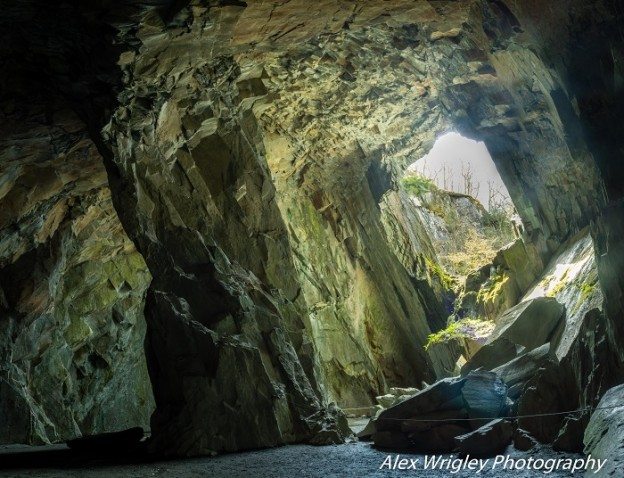 I’ve just teamed up with Alex Wrigley, a Lake District local who writes some excellent blogs about the Lake District and takes wonderful photos too.

Alex says, “Growing up in the Lake District National Park, it’s almost impossible not to fall in love with nature. The sheer diversity of the landscape, ranging from mountainous cliffs to serene lakes and coastlines, have been the source of inspiration for countless poets, writers, and artists”.

Here’s the 1st of Alex’s blogs about one of his favourite secret places in the Lake District.

Hodge Close and Tilberthwaite in the Lake District

“It’s strange that I keep getting drawn back to Hodge Close and Tilberthwaite. It’s an unwelcoming, hostile environment full of perils, but the atmosphere and drama suits the typical Lake District winter weather perfectly.

My most recent trip saw me exploring the edges of the huge voids excavated during the extensive quarrying activity last century.

Once a thriving network of quarries and mines, Tilberthwaite and Hodge Close have since been reclaimed by nature. In my numerous visits there I have seen a grand total of three other people, which is understandable.

The area is often overlooked by tourists, walkers, and locals due to its unwelcoming exterior. This is understandable too, on these visits I have never seen the area look welcoming. The huge chunks of igneous rock that protrude out of the rugged landscape almost mirror the vast voids that have been carved out of the ground by the early 20th century quarrying activity.

These 100 metre unfenced drops into oblivion aren’t the only perils that make this area seem unwelcoming. There’s the highland cattle with three-foot long horns, the vast grasslands that have been beaten into submission by almost constant wind and rain, the hardy looking trees that seem to sprout directly out of the rock face, and the ominous, omniscient Langdale Pikes watching over you.

But a few people find themselves returning again and again, me included. Why? Because this is an area that can be captured in any light, at any time of year, and at any time of day. There is a huge variety of opportunities available for landscape photography, and it’s sometimes a welcome break from the serene landscapes I frequent so often.

If there was ever a need to describe Tilberthwaite and Hodge Close in two words they would be ‘Dramatic and atmospheric’.

I wanted to go out for a sunrise shoot, and since the weather was looking rather overcast I decided on Hodge Close. It is just perfect in these overcast, low visibility conditions, much like Birkby Fell which I visited earlier this year.. The area evokes an eerie atmosphere that suits these conditions perfectly, and when the huge quarries are filled with fog and clouds it adds a certain sense of mystery to your images.

I spent the morning wandering around the two main quarries of Hodge Close, with a brief venture out to a small area of woodland and a look over in Little Langdale’s direction. It was Hodge Close quarries that were attracting me on this particular morning though. There was low cloud covering the area and the passing showers that were sweeping over kept reducing visibility even more, incurring further mystery into the landscape.

The passing showers and low clouds made for some dramatic and atmospheric images.

The trees around these quarries are what make the landscape so appealing. They twist and bend and lean over the edges of the huge, mist filled craters. The sheer cliff faces that drop off into oblivion add even more drama to the area, and help to give a sense of scale to the photographs.

The sheer cliff faces add a great sense of scale to the area. Just be careful not to fall!

Other Attractions in the Area

I didn’t have a great amount of time on this visit, but the surrounding area is filled with fantastic photographic opportunities that I usually pay a visit to.

Little Langdale Tarn is fenced off and can’t be accessed directly, but a short way down the path and you can go to the famous Slater Bridge. The shallow river bed surrounding the bridge makes it perfect for capturing the movement in the water, and who can argue with a backdrop of those iconic Langdale Pikes.

Cathedral Cavern isn’t far away from Slater Bridge. The main cavern is a vast chamber that was carved out during the quarrying years, with two large windows providing streams of natural light that reflect off the rock faces to emit an eerie green glow. The huge column provides support to the roof as well as adding even more interest into the cavern.

This huge manmade cavern (as seen in the image above) provides a welcome break from the wind and rain usually battering the surrounding area.”