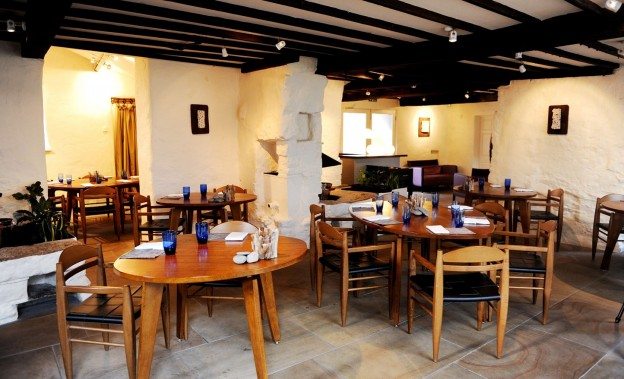 When you’re in a Cumbrian restaurant, sat at a Cumbrian crafted table on a Cumbrian made chair, drinking a Cumbrian ale, eating a piece of Cumbrian clover, you just might think you’re in the hands of a chef who really cares about provenance. But what makes Simon Rogan truly exceptional is not the lack of food miles on your (Cumbrian) plate: unlike so many of his fellow sustainable scavengers, Rogan knows it’s what you accomplish with the raw ingredients that counts.

Rogan’s L’Enclume – opened a decade ago but recently named 2013’s best restaurant in the  Observer Food Monthly and declared by the Sunday Times as the ninth best dining spot in the country – is the most singular expression of Rogan’s roaming tendencies and bold experimental flavours. It also happens to be the most relaxed Michelin star restaurant you’ll find.

The  first  choice  you are presented with  upon arrival  is the number of courses you wish to consume (and reconcile yourself with the fact that no matter where you sit, at least one table within earshot will be discussing why they couldn’t possibly stomach 21 courses). The restaurant has an unhurried, unpretentious feel:  water glasses are made  from  reclaimed wine bottles and both plates and pottery appear in delicate shades of mushroom and teal. And while Steve Coogan and Rob Brydon had some gentle fun in The Trip with a near incomprehensible French waiter, when GQ visited the staff could not have been amenable.

Where L’Enclume excels is subtly expanding your culinary horizons to  give you a more intriguing version of your original choice. For instance, ask for a glass of champagne and they’ll offer you a chilled Henners Brut English sparkling as a homegrown substitute. The beers on offer are exceptional – and for once proudly displayed, rather than tucked away at the back of the menu like some sort of guilty gastronomic secret. “The Land of Cartmel” pale ale (inspired by  JC Dikinson’s  1980 history book of the same name) may have been brewed about 30 yards away from L’Enclume but could stand toe-to-toe with any IPA in the country.

The dishes themselves are tiny exemplars of flavour, texture and the merits of a good herb garden. The “cod yolk” (looks like an egg, contains fishy mousse) paired with broad beans and watercress was a delight. The tiny “Tokyo turnips” are titchy and earthy in equal measure – a bit like a Baldrick haiku.  The “valley venison” look a touch too Winalot for some tastes but served on a slate with blobs of yellow mustard, it had an undeniable vibrancy of flavour. The gentle sweetness of a rhubarb dessert was offset both by the tangy hint of sorrel and a delicate yoghurt crisp. As a final touch, there are a vast number of wines by the glass and if you are planning to ignore the naysayers and have the full 21 courses, we would heartily recommend a bottle of the Gusbourne Chardonnay (which comes from the exotic Southern climes of Kent).

Never gimmicky nor ever anything less than assured, L’Enclume is the product of a truly remarkable chef. Rogan is someone who can clearly bring something very different to the table and not just in Cartmel – as Roganic, his first London outing, proved during its acclaimed two year stint in the capital. Claridge’s, with its dedication to service and sense of the theatrical, should be a perfect second home. Although quite whether the foraging will be as fruitful in Mayfair remains to be seen…

Another dollop of indulgent information brought to you from the providers of luxury Lake District cottages in the Cartmel Valley. See our cottages near Cartmel